skip to main | skip to sidebar

99 fleas was the first book to be published in 2005 by Palabras del Candil, an editorial group that specialises in books and stories produced by oral narrators. Six years later this editorial group has achieved more than thirty titles in its catalogue and has become recognised as an indispensable source within the field of oral narration.
Six years on, 99 fleas remains very popular and is actively read, recommended, bought, talked about, and shared…, a book comprised of a good handful of short stories (99) surprising and sharp, ominous and fun, that don’t stop jumping from reader to reader, like fleas. Maybe this explains why it is currently in its third edition and that a new volume has been published recently, entitled 101 fleas, comprising more short stories from both these and other authors.
Palabras del Candil has decided to publish a collection of books in English and has found no better way than to go down the same route as it did at the start: publishing 99 fleas, a book written by Pablo Albo, Pep Bruno and Félix Albo, three oral narrators with renowned prestige both within (and increasingly more so outside of) Spain, with a number of published books and many hours of storytelling in their backpacks. 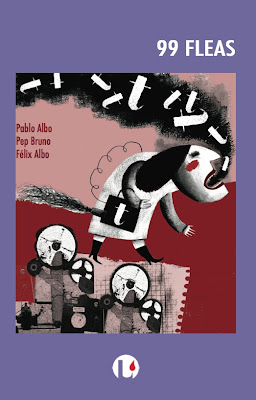 Pablo Albo, Pep Bruno and Felix Albo are storytellers, writers and friends. The three began telling stories professionally in 1994 and since then their paths have crossed in fictional landscapes, storytelling festivals and bars.
Between the three of them they have told thousands of stories and been heard by hundreds of thousands of people. They have a sizeable handful of books published and have received a number of prestigious prizes. Theirs is a tale, whether together or apart. This book is the proof.